On Sunday I got to catch Los Angeles pop rock band Symmetry open for Bedford’s Don Broco. Having not listened to the band prior to the set, I wasn’t sure what to expect, but what they did do was blow me away. They were without a doubt the best support act of the night! Coasts and Arcane Roots were also on the bill.

On the train home for the gig, I streamed the band’s new album “Cure”. What surprised me was that the sound from their live set was on par with the album – it was amazing! What Symmetry did was start the night off right – They set the tone and mood for the rest of the evening. The band opened with ‘Fast Lane’ – a really catchy upbeat track which got Brixton moving.

This was followed by ‘Hey’ and ‘Fight To Love’ – again solid pop-punk/rock tracks which sounded as good as they do on record. The band closed with the title track from the album ‘Cure’.

My personal highlight from the set was the band’s cover of Katy Perry‘s ‘Roar’. Even though the audience may of not been familiar with the band, everyone sang along to this modern pop classic. It was great to see (and hear) the opening band get such a positive reaction.

I look forward to seeing more of Symmetry in 2016. 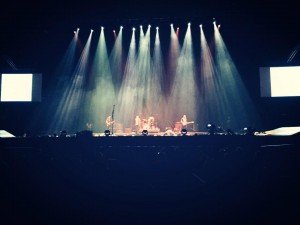